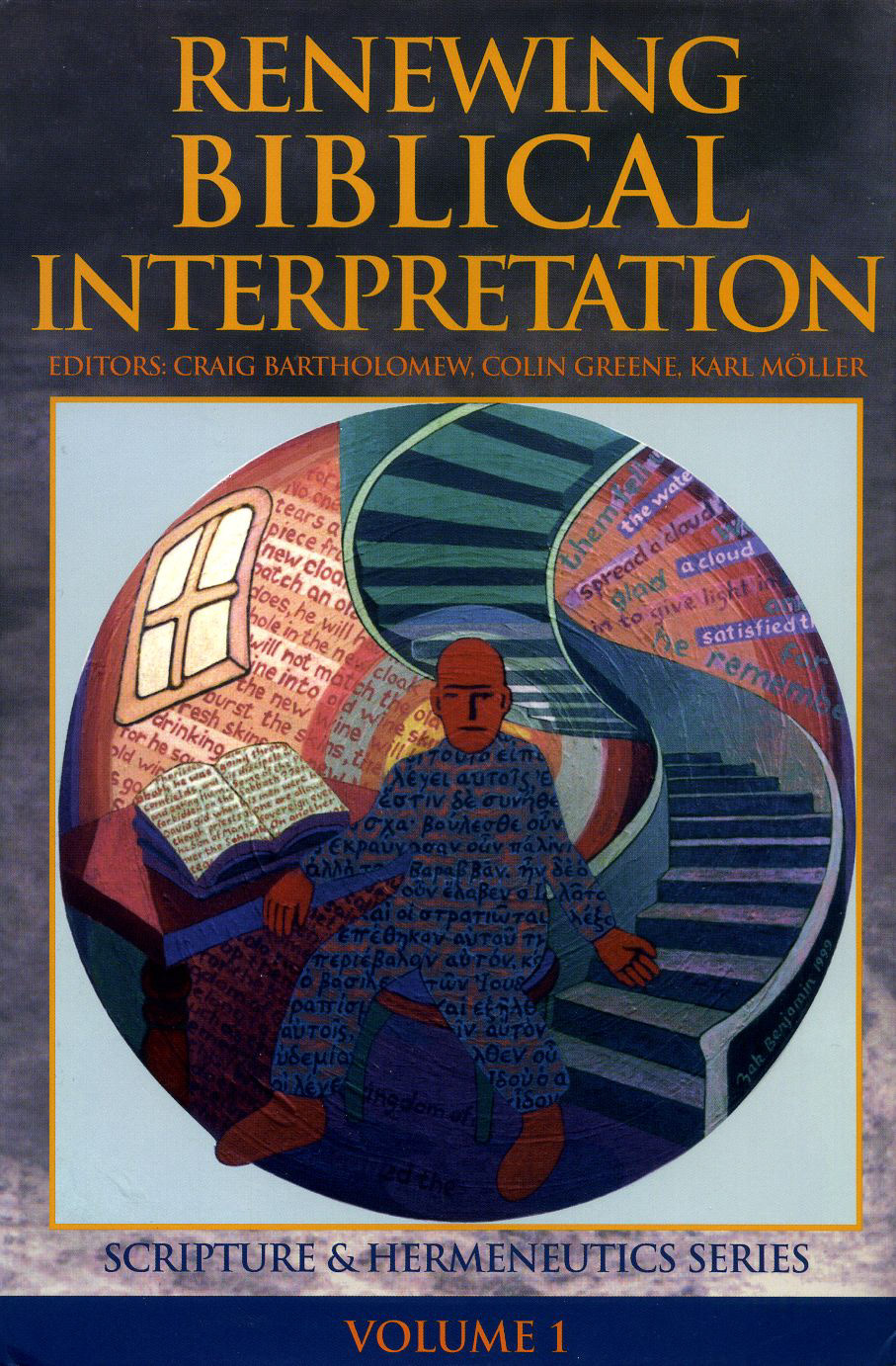 Craig Bartholomew, Colin Greene and Karl Möller (eds), Renewing Biblical Interpretation (Scripture & Hermeneutics Series, 1; Carlisle: Paternoster Press; Grand Rapids, MI: Zondervan, 2000)
“Without the voice of the Living God addressing us through Scripture, Christianity collapses into so much empty rhetoric and the world is left without the redemptive, recreative Word of God.”
Craig Bartholomew
Renewing Biblical Interpretation is the first of eight volumes from the Scripture and Hermeneutics Seminar. This annual gathering of Christian scholars from various disciplines was established in 1998 and aims to re-assess the discipline of biblical studies from the foundation up and forge creative new ways for re-opening the Bible in our cultures.
Including a retrospective on the consultation by Walter Brueggemann, the contributors to Renewing Biblical Interpretation consider three elements in approaching the Bible – the historical, the literary and the theological – and the underlying philosophical issues that shape the way we think about literature and history.
“Church History is in large measure the history of biblical interpretation. And almost all contemporary cultural and intellectual movements eventually show up in biblical interpretation as well. Both modernity and modern biblical studies are showing signs of ageing, and it is agreed that the critical approach that has dominated the discussion for the last two hundred or so years has obscured the Bible’s role as the Church’s authoritative Scripture. All the more reason to be grateful, then, that there is now an academic seminar devoted to the project of recovering a theological dimension to the interpretation of Scripture. This first volume holds out the hope that certain hermeneutical developments will lead not only to the renewal of biblical interpretation, but to the renewal of the Church itself.”
Kevin J. Vanhoozer, Research Professor of Systematic Theology, Trinity Evangelical Divinity School
“There are few things more urgent for Christian thought in the churches and in universities and seminaries than to produce lively, intelligent and imaginative biblical interpretation. The Scripture and Hermeneutics Seminar is facing the deepest issues involved in doing this. It does not run away from complexity or controversy. But above all it is concerned to do justice to the extraordinary, generative richness of the Bible and to let it be genuinely ‘habitable’ today. This book will illuminate, inspire and provoke anyone who wants to learn from some of the best in the field how to respond to the Bible in the aftermath of modern critiques and crises.”
David F. Ford, Regius Professor of Divinity, University of Cambridge
“This book brings together some of the key players in the present discussions of how to use the Bible, not simply to talk about how difficult it all is but to point new and creative ways forward. A refreshing and wide-ranging discussion that will help us all both to think clearly and to read – and teach! – more responsibly.”
Tom Wright, Canon Theologian, Westminster Abbey
Contents
Uncharted Waters: Philosophy, Theology and the Crisis in Biblical Interpretation
Craig G. Bartholomew
Scripture Becomes Religion(s): The Theological Crisis of Serious Biblical Interpretation in the Twentieth Century
Christopher R. Seitz
The Social Effect of Biblical Criticism
Walter Sundberg
A Response to Walter Sundberg
John Riches
Confessional Criticism and the Night Visions of Zechariah
Al Wolters
A Response to Al Wolters
Rex Mason
The Philosophy of Language and the Renewal of Biblical Hermeneutics
Neil B. MacDonald
A Response to Neil B. MacDonald
Mary Hesse
Renewing Historical Criticism
Karl Möller
Critical but Real: Reflecting on N. T. Wright’s Tools for the Task
Thorsten Moritz
‘In the Arms of the Angels’: Biblical Interpretation, Christology and the Philosophy of History
Colin J. D. Greene
An Experiment in Biblical Criticism: Aesthetic Encounter in Reading and Preaching Scripture
Stephen I. Wright
A Missional Approach to Renewed Interpretation
Harry Daniel Beeby
Deconstructing the Tower of Babel: Ontotheology and the Postmodern Bible
Brian D. Ingraffia
Imagination and Responsible Reading
Trevor Hart
A Response to Trevor Hart
Nicholas Wolterstorff
A First Retrospect on the Consultation
Walter Brueggemann
Purchase on Amazon UK
↑Back to Top