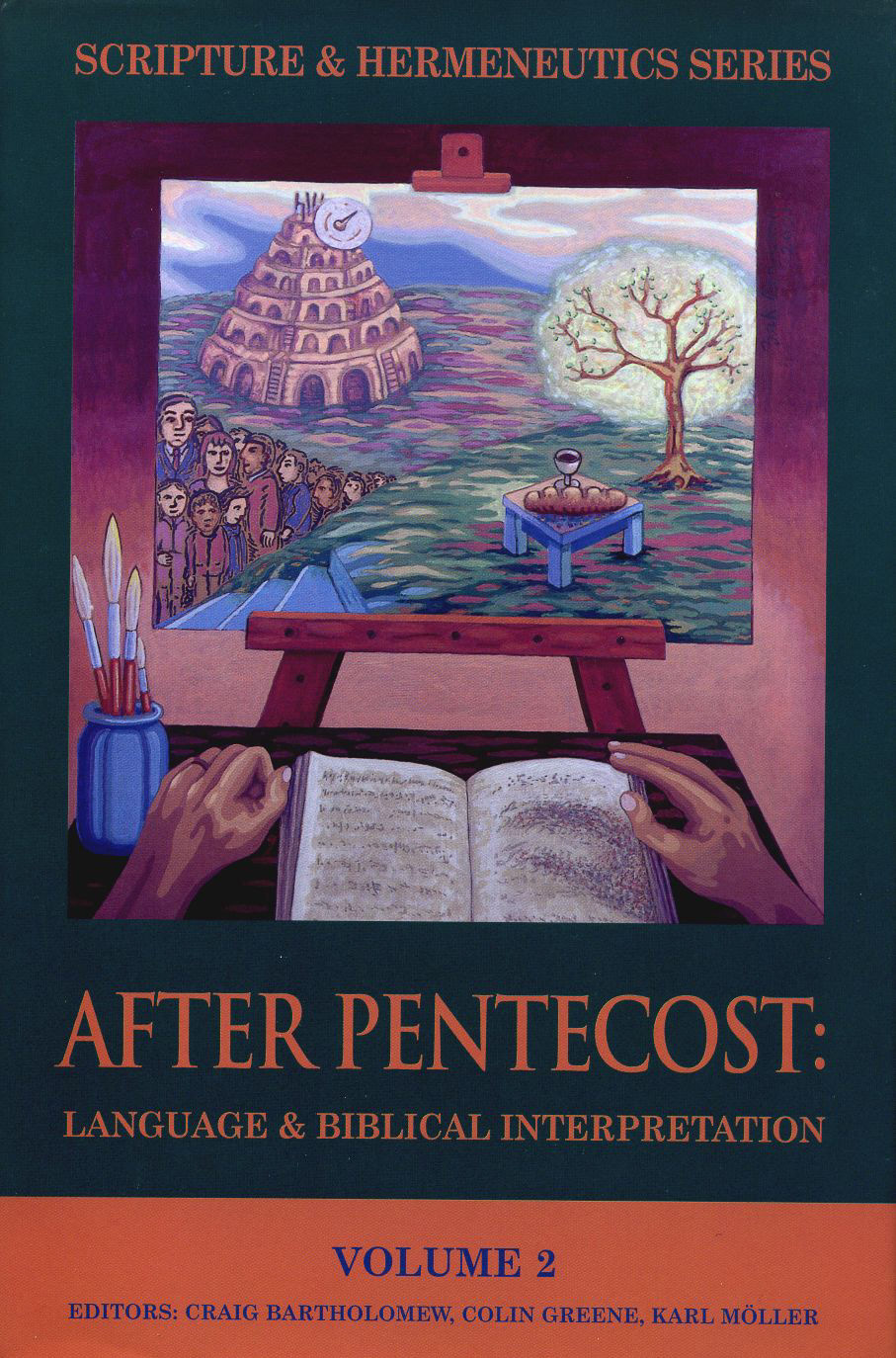 Craig Bartholomew, Colin Greene and Karl Möller (eds), After Pentecost: Language and Biblical Interpretation (Scripture & Hermeneutics Series, 2; Carlisle: Paternoster Press; Grand Rapids, MI: Zondervan, 2001)
“There is always some view of language built into biblical interpretation. If we are to read Scripture to hear God’s address it is vital that we attend to current debates about language and become critically conscious in this respect.”
Craig Bartholomew
After Pentecost is the second volume from the Scripture and Hermeneutics Seminar. This annual gathering of Christian scholars from various disciplines was established in 1998 and aims to reassess the discipline of biblical studies from the foundations up and forge creative new ways for reopening the Bible in our cultures.
The Seminar was aware from the outset that any renewal of biblical interpretation would have to attend to the issue of language. In this rich and creative volume the importance of linguistic issues for biblical interpretation is analysed, the challenge of postmodernism is explored, and some of the most creative recent developments in philosophy and theology of language are assessed and updated for biblical interpretation.
“The scholars who together have produced this remarkable volume – and the projected series of which this volume is a part – are prepared to deal patiently and honestly with the most elemental theological issues. The title, After Pentecost, alludes to the problem and prospect of language as the condition of theological truth, and the authors are fully conversant with the most important theoretical issues concerning language. They mobilize that vast learning for the tasks of exegesis and theological adjudication. This is a serious book, a genre in which there are few current representatives. The book will bear careful, patient study. It cannot be ‘read,’ but must be studied. The treatment of theological language as a theological issue offered here matches the gravity of the topic itself. Immense learning is mobilized in the service of serious critical reflection on behalf of the church as the church faces an entirely new situation with the demise of modernist rationality and its accompanying positivism.”
Walter Brueggemann, Professor of Old Testament, Columbia Theological Seminary
“This is an excellent collection on a topic for which interdisciplinary conversation between biblical scholars, theologians and philosophers is vital. These essays deserve to be widely read and to draw many more of us into that conversation.”
Richard Bauckham, Professor of New Testament Studies, St Mary’s College, University of St Andrews
“Central to the theological task is the question as to how human language functions and refers within the context of Christian revelation. This volume contains an impressive series of essays and responses by leading contemporary philosophers, theologians and biblical scholars brought together to consider the relationship between biblical, exegetical and theological discourse. Their work is characterised by a shared concern to articulate the manner in which God may and does speak in and through human speech. This significant contribution to the debate will prove invaluable to anyone committed to intellectual engagement with these key issues.”
Alan Torrance, Professor of Systematic Theology, University of St Andrews
Contents
From Speech Acts to Scripture Acts: The Covenant of Discourse and the Discourse of Covenant
Kevin J. Vanhoozer
Ricoeur, Speech-Act Theory, and the Gospels as History
Dan R. Stiver
The Promise of Speech-Act Theory for Biblical Interpretation
Nicholas Wolterstorff
How to Be a Postmodernist and Remain a Christian: A Response to Nicholas Wolterstorff
Mary Hesse
‘Behind’ and ‘In Front of’ the Text: Language, Reference and Indeterminacy
Anthony C. Thiselton
A ‘Polite’ Response to Anthony Thiselton
William Olhausen
Before Babel and After Pentecost: Language, Literature and Biblical Interpretation
Craig G. Bartholomew
Language at the Frontiers of Language
Gregory J. Laughery
‘Starting a Rockslide’ – Deconstructing History and Language via Christological Detonators
Colin J. D. Greene
Words of Power: Biblical Language and Literary Criticism with Reference to Stephen Prickett’s Words and the Word and Mark 1:21-28
Stephen I. Wright
Reviving the Power of Biblical Language: The Bible, Literature and Literary Language
Brian D. Ingraffia and Todd E. Pickett
Naming the Father: The Teaching Authority of Jesus and Contemporary Debate
David L. Jeffrey
Back to Babel – That Confounded Language Again: A Response to David L. Jeffrey
Kathryn Greene-McCreight
On Bible Translation and Hermeneutics
Raymond C. Van Leeuwen
Illocutionary Stance in Hans Frei’s The Eclipse of Biblical Narrative: An Exercise in Conceptual Redescription and Normative Analysis
Neil B. MacDonald
Metaphor, Symbol and the Interpretation of Deuteronomy
J. Gordon McConville
Words of (In-)evitable Certitude? Reflections on the Interpretation of Prophetic Oracles of Judgement
Karl Möller
Metaphor and Exegesis
Ian Paul
Purchase on Amazon UK
↑Back to Top